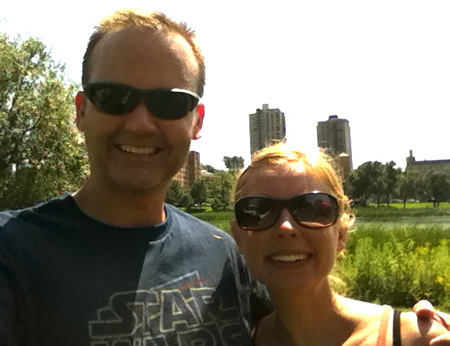 Hellraising Hot Sauce was launched in Minneapolis by husband and wife team David and Leigh Taylor, along with their passion for all things spicy. They found the Twin Cities to be lacking a local favorite hot sauce, so we decided to make our own!

Hellraising Hot Sauce became official in 2013, but the story actually starts much earlier. David began collecting hot sauces in the nineties and his modest collection soon began to take over the shelves at home. He started opening and trying the sauces, and quickly became fascinated by the unique flavor and spice combinations and the different types of chile peppers. The collection disappeared and he began tinkering with his own recipes, bottling and labeling the “Hellraising” sauces for parties, gifts and to commemorate special occasions. Friends, family and co-workers loved the combination of heat and flavor, but it remained a part-time hobby.

Fast forward a few years. Leigh had heard enough stories about this hobby, and eager to learn more, encouraged David to move forward and put our knowledge and enthusiasm to work. The original recipe was resurrected, modified, tasted, and tested until Triple Inferno was perfected. Sweet suffering and Green Fever followed swiftly after, and with the support of local customers, restaurants and grocers, a Minnesota small business was born.

Find Hellraising Hot Sauce in the grocery department of your nearest Kowalski's location.