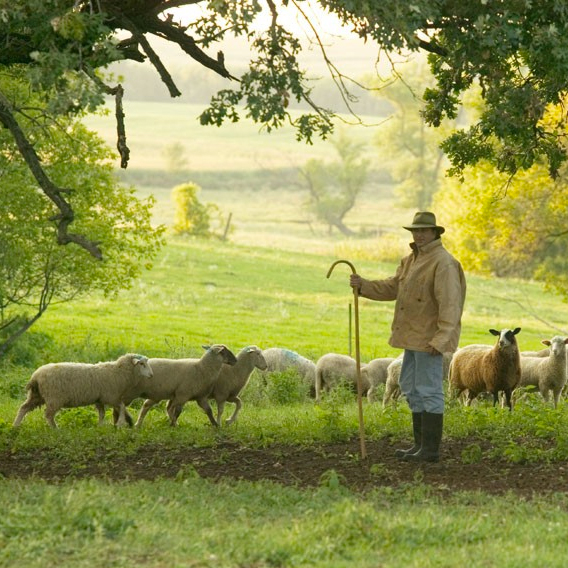 After a devastating arson fire on January 24, 2005, nearly destroyed their sheep farming and cheese operation, the prospects of continuing their dream might have caused many of us to give up; but not Steven and Jodi Ohlsen Read and their four sons. With determination and tenacity that is truly admirable, they have nursed their flock back and began milking again on their farm near Northfield, MN.

Their story really begins when Steven was in graduate school at the University of Minnesota. "With one child, and another on the way, Steven and I began to reexamine how we wanted to raise our family and live our lives," Jodi said. "We wanted to find a way to spend more time together as a family and to creatively combine our interests in the environment, animals and community. When Steven came across an article about milking sheep, the idea really resonated with us."

The Reads bought a small flock of sheep and a dairy ram in October, 1994. The next season, they began selling their milk through a cooperative in Wisconsin. When they discovered they had more milk than they could sell, they decided to explore the possibility of making cheese. "With a little market research and the help of a professor and a cheesemaker who had been involved in the dairy sheep program at the University of Minnesota, we made our first batch of cheese at the University's pilot plant in August 1998," said Jodi. "When we moved to Northfield in 2001, we incorporated a new sheep dairy parlor and farmstead cheesemaking facility inside the existing 1940s barn. Shortly after our move, I put my full-time writing career on hold and became the cheesemaker."

But then came the fire. While the barn that houses the milking parlor, cheesemaking room, and aging rooms was saved, all of the animal housing was destroyed - including the large freestall barn that served as winter shelter and the lamb barn. "We also lost 200 lambs and more than 300 ewes, and many of the sheep that did survive are still challenged with fire-related health issues," said Read. Although they had insurance, it wasn‚Äôt enough to replace all they had lost and rebuilding the flock takes time, so the process of coming back has been slow but steady.

At the suggestion of several farm supporters, the Reads created an Adopt a Sheep Program, which helps support the sheep and the recovery. "By donating $100, you can choose a name for one of the Shepherd's Way sheep, and in return you will receive a naming certificate and a picture of the flock," said Jodi. "Many individuals, companies, classrooms, girls scout troops, and other groups have participated in the program, and have even come to visit the farm. It has been a fun way to involve the community."

Shepherd's Way has continued their cheese production, using milk from other shepherds. However, they plan to begin milking their own flock again this spring. You can currently purchase Big Woods Blue – an American Cheese Society blue ribbon winner – in the Specialty Cheese Department at all Kowalski's, along with award-winning Shepherd's Hope and Friesago which will be available in late spring.

Jodi calls Friesago her "go-to cheese" because it melts nicely and is fairly mild, yet has a good depth of flavor. "I use it in macaroni and cheese, on pizza, pasta, grilled sandwiches and cubed in salads," said Jodi. "Shepherd's Hope is great with fried potatoes, scrambled eggs and quesadillas, or served with fresh tomatoes and basil. The Big Wood's Blue makes an incredible grilled cheese sandwich or can be added to a white sauce along with toasted walnuts or pine nuts for a rich pasta sauce," suggests Jodi.

At Kowalski's we look forward to a bright future with Shepherd's Way Farms...from the grass, to the milk, to the production of wonderful artisan cheeses! We applaud your comeback and wish you the best as you continue to rebuild your family business.