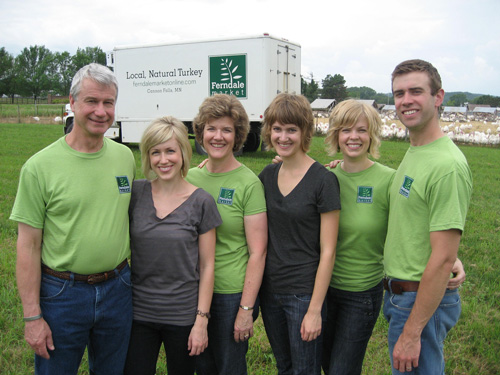 Nearly seventy years ago, Dale Peterson settled in Cannon Falls, MN, to do what he knew best: raise turkeys. In the early years, he shared a residence with incubators, and the sound of day-old turkeys routinely filled his home. Dale's wife, Fern, had grown up raising turkeys, and although she thought she had left them forever when she left home and became a school teacher, her plans changed when she met Dale! Fern was an avid advocate for the environment, and believed that everybody had a role to play in preserving our earth. Through the years, the legacy of Fern and Dale has guided the farm's mission, so it was only fitting that Ferndale Market be named in their honor.

The Ferndale tradition has continued for three generations, with Dale's grandson John and his wife Erica running the business alongside Dale and Fern's son Dick and his wife Martha, where they treat customers as family and care deeply for both the land and their turkeys.

Dale always believed that raising quality turkeys was the best contribution he could make to the world, and his formula for success was simple: he worked hard, treated customers as family, and cared deeply for both the land and his turkeys – a tradition that has continued for three generations. Although their family's days of literally sharing a home with turkeys are in the past, they are still committed to raising their birds naturally: free range during the warmer months and antibiotic-free all the time, using sustainable farming practices. All their turkeys are also processed naturally – without any additives – at a USDA facility. Taste the difference of locally raised.

Find Ferdale Market Turkey in the Meat Department of your nearest Kowalski's location.